Version 1
A German-speaking French with a captivating accent - to fall in love with Silea has rediscovered this traditional Varieté art for herself.

Antics of a past time are brought back to life when this french girl with a sexy accent takes her audience into the steaming atmosphere of a speakeasy where one not only dances on tables but also on bottles. And what a grand finale:
A „Monsieur“ from the audience will have the pleasure to shove bottle after bottle under Silea’s feet.
duration ca. 13 minutes

Version 2
A slightly crazy and incredibly likeable Swede, who is understood by everyone, even though no one understands what she is saying. „She’s just killing me“

We have always known it: The Scandinavians are crazy. And here is Silea like a grown up Lotta on Troublemaker Street and celebrates swedish drinking culture in her own style. A cheer for the bottles and cheers. That no one speaks swedish is not an issue, everybody still gets that energetic rockchick, she is simply self understood. And on top, her impressive balance on the bottles speaks for itself.
Duration ca. 6 minutes 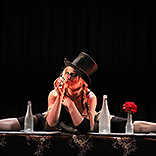 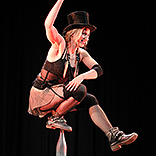 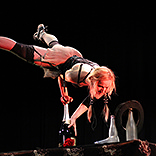 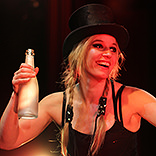